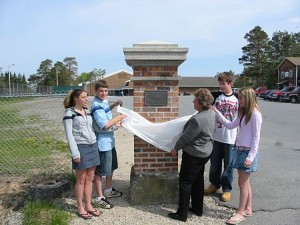 The Park! marks 72nd anniversary with dedication of restored entrance

By the terms of his will any residue in his estate after the passing of his widow was to be used for the purchase and creation of a park for the Village of Chester. The property was purchased in 1928 and construction of tennis courts, a club house and baseball field were completed in the fall of 1932. There were no provisions for maintenance and upkeep of the park in Senator Church’s will, and the responsibility fell to a Citizens’ Park Committee comprised of local volunteers.

Thanks to the generosity of Mrs. Joseph N. Pew. and lands donated by Mrs Roy Chandler, the Eleanor Pew Morris Memorial Rink complex, comprising an ice arena, four-sheet curling rink, clubhouse and canteen facilities, opened on the park site on February 14, 1970. Eleanor Pew Morris was one of three daughters of Joseph N. Pew Jr. and Alberta C. Pew. She pre-deceased her mother Alberta who then helped establish the rink as a memorial to her. The Park continues to receive annual financial support from The Pew Charitable Trusts, as well as from the Municipality of the District of Chester.

The Park! recreational complex marked its 72nd anniversary on June 3, 2005 with a ceremony to dedicate the restored entrance pillars and to recognise the generosity of a Chester businesswoman instrumental in the restoration.

Elaine Collicutt, who operates a local landscaping and property management company, unveiled the refurbished structures to mark the event. Ms. Collicutt contributed the materials and labour to effect the restoration of the pillars.

The ravages of time, weather and snowplows took their toll on the original entrance pillars, and Ms. Collicutt stepped forward with the offer to return them to their original splendour, using the original 1928 plans.

In 2008 the land at the East side of the parking lot housed a Scout Hall and Tea Room, shown below.  These two buildings were used by numerous community groups and organizations for many many years.

Unfortunately, these two buildings were condemned and demolished.   They were replaced by the Chester and Area Family Resource Center, pictured below

The Little Library is Installed on the Trail !

We have redesigned our website and encourage your feedback.

Look under the News tab for older updates.

On school storm days, teacher in-service days, and weekday holidays ice is available at $85.00(plus hst) for first 2 hours of rental, then $75.00(plus hst) per hour.